In 1980, as I mentioned before, I fell in love with the hieroglyphs and began to translate the interlinear text from Wallis Budge's book The Egyptian Book of the Dead, Papyrus of Ani. It took me 10 years, and it taught me how to think like a poet. 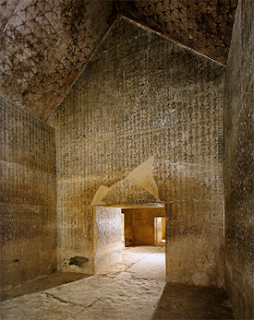 More than 20 year ago I decided I wanted to translate the hieroglyphs in the Pyramid of Unas. I began eagerly but worked very slowly as I didn't want to make any mistakes. I made a mistake. It was 20 years of tedious work with excessive tracing of my footsteps so I and others could see where I was going and how the work was to be seen.  In the meantime Jeremy Naydler published his beautiful work Shamanic Initiations in the Pyramid Text, re-translating the same text and getting sot much of what I was working on that at times I felt he was looking over my shoulder!

But there is still more work to do here, I thought. So after childbirth, and divorce and following job after job into new city after city, I still hadn't finished the translation of Unas' hieroglyphs. Susan Brind Morrow came out with her translation Dawning Moon of the Mind, for which she got a Guggenheim and I was/am still working with my hieroglyphs.  I guess it's not about winning the race, it's about being in love with the language for me. Tonight, I am still as my translations, preparing for a talk at the Global Pyramid Conference in Chicago in May. (Check out the line up of speakers here:  https://globalpyramidconference.com/speakers-and-topics/ )

(In the meantime I will be returning to see my Pyramid of Unas in Egypt in just a few days.) 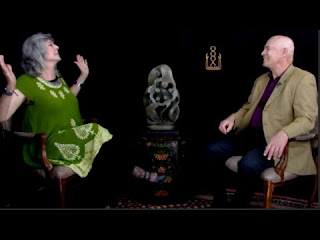 I traveled recently to Las Vegas to tape a segment on the New Thinking Allowed with Jeffrey Mishlove. We talked about what I was learning from the work I've done and the classes I teach in Hieroglyphic Thinking.  (And as of this week you can find that interview on Youtube's New Thinking Allowed links.)
Magic and Initiatory Practices of Ancient Egypt with Normandi Ellis:
Hieroglyphic Thinking with Normandi Ellis:

On the airplane I was reading the Susan Brind Morrow book and making notes in my journal. I found a Christopher Frye quote about poetry that if I substituted the word hieroglyph for poetry, it said pretty much what I felt...


"Hieroglyphs have the virtue of being able to say twice as much as prose in half the time, and the drawback, if you do not give it your full attention of seeming to say half as much in twice the time."
Yes, I thought that is why it has taken me soooo looooong to complete the translations of these 3 rooms.
Note to self: SBM suggests one can read the hieroglyphs jumping across the lines next to each other as well as up and down the line. Oh my Goddes, that is just crazy good.

It made me want to finish my trip and hurry home and back to Unas.  But first I had to do the Las Vegas gig.  (Turns out it was a fantastic gig, and we taught and did spring equinox ceremonies, and had a blast. New note to self: Let's not rush through life.)

So I get in the Uber taxi and off I went to Sheila Z's house. The driver was wonderful and chatty. Turns out he was Ethiopian and had grown up along the Blue Nile. He was an Ethiopian Christian--
I could tell by the Coptic cross hanging from his rear view mirror.
"What's your name?" I asked.
"Unas," he said.
What!?  Did you say Unas?
"No Unis," he said "like in the Bible."

I asked him to tell me the story of Unis in the Bible. He said Unis was the man God told to go here but he wouldn't go. He said "No God, not there, "so he stayed home. And God said, "Unis I told you to go. Why don't you go?"  He said "I'll go anywhere but there," so he stayed home. So Unis went fishing in his boat and the wind died down and he couldn't leave. A big shark came out of the water and ate him.

I was starting to catch a glimmer.  "You mean a whale?" I asked.
It was in the sea, my driver insisted, and then he was stuck inside the shark for three days. It was so dark, until the shark spat him out on the ground....
"In exactly the same place that god told him to go--Ninevah."
Anyway that is who I am named for.

After he left me and my luggage at the curb--and believe me for a story like that I tipped him well--I was still thinking about the hieroglyphs my friend Emil was fond of showing us in Karnak. It was the hieroglyph of Jacob's name, spelled in glyphs Y-Ka-B. Yakob/Jacob.  Yunis/Jonas/Unis.

Posted by Normandi at 7:07 PM No comments: