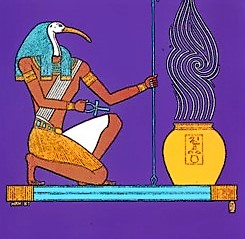 When the Egyptian god Thoth created the world in his cauldron, according to myths in Heliopolis, he stirred the waters of creation and found there four pairs of beings, that were basically Infinite Light (Ra & Raet), Infinite Darkness  (Kek & Keket) Infinite Time (Heh & Hehet) and Infinite Space (Nu & Nut). Some include these two as well: Infinite Mystery (Amen &Amentet).

This talk evolved in the class I was teaching in sacred calendar, exploring a study of time, space, light, and dark as well as creation of the world.


Some of you may think that since the close of the Mayan calendar in 2012 there’s not an imperativeo for learning sacred calendars. I don’t believe that’s true. The sacred calendar lends a basic understanding for any metaphysical practice. In essence, sacred calendar is about learning to understand patterns now so well that you can predict the future and understand the past. Synchronicity is just a larger pattern that we have not yet grasped. It’s all in the timing.


Sacred calendar is steeped in several important phenomenon: Light, Vibration, Pattern, and Timing. And as light workers, which is what spiritualists are – whether Christian or Unitarian or Spiritualist or pagan – sacred calendars help us understand the importance of the liturgical year as well as give us a grass on the underlying power of light and dark, the rhythms of human life.


Meditation is useful as a tool because in it, you practice being in two worlds—stepping into earth time and sitting within eternal time. In meditation in eternal time, you can experience two things. It slows down your body clock enough so that you can move backward and forward across an infinite psychic space. This is the true meaning of the voice that speaks over the waters mentioned in Genesis. Here is how sacred calendars began.


In the beginning God created the heavens and the earth. 2And the earth was formless and void, and darkness was over the surface of the deep; and the Spirit of God was moving over the surface of the waters. 3Then God said, “Let there be light”; and there was light. 4And God saw that the light was good; and God separated the light from the darkness. 5And God called the light day, and the darkness He called night. And there was evening and there was morning, one day. (New American Standard Bible Genesis 1:1-5)


In other versions we are told that this is the voice upon the face of the water. And what is voice but a vibration or read them which sets out an energetic force that we may define as (New American Standard Bible Genesis 1:1-5) consciousness of God or God’s will. This vibration is time that ripples across space and sets the world in motion. From it emerge all atoms, planets and cycles.


Sacred calendar is all about seeing the pattern of your life as a mirror of God consciousness. In meditation you tap into that divine eternal creative. We can safely say that learning sacred calendar is part of learning how to use the Law of Vibration and the Law of Rhythm. Rhythm and time are intricately linked, as space and form are linked to vibration. The law of vibration monitors such things as the movement of atoms, the beating of the heart, the tug of the moon tides, the spinning of planets, earth, galaxies and universes. The construction of brain waves is part of what we metaphysicians call the Law of Thought – and thought is vibration.


Vibration is what composes space and time. Space and time themselves create consciousness. Consciousness is the meaning of matter – the things that exist in time and space in relationship to each other.


This study also shows us the powerful Law of Opposition wherein the sacred calendar reflects the potencies of light and dark, day and night, hot and cold, birth and death, sleeping and waking. Without primitive mankind ever knowing that the earth was tilting on its axis, she understood that a pattern was set for creating cold winters and hot summers with temperate springs and autumns. By tracking these patterns of opposition, she could regulate the times when it was important to plant and sow seeds, as well as to reap grains. Observing the movements of planets, stars and the sun he could predict the movement of game across the landscape and thus plan his hunting routes.


Time in general is about understanding cycles and light. (I have to say that as I was working on this material all of the clocks in my house began to check and run backwards. After three days they righted themselves. Make of that what you will. It’s a synchronicity I’ve yet to unravel.)


And so we have used sacred calendars, possibly since the beginning of human history, to help us modulate our life activities. They tracker agricultural seasons so that we don’t plant seeds too early or too late, and so that the shepherd knows when to send his flock or cattle into pasture. Women were probably the early calendar keepers because they noticed that their menstrual cycles and the cycles of the moon were similarly influential. Planetary and stellar cycles influenced the great ancient civilizations: The Mayans tracked the planet Venus with incredible accuracy and the ancient Egyptians tracked the helical rising of the star Sirius to ascertain the timing of the Nile flood.


Even birds, without calendars, migrate North or South based upon the amount of available sunlight in those places where they live. Their mating season and the production of eggs to create new life forms is stimulated by the effect of sunlight on their pineal glands. We are all creatures of light. And as light workers it is especially important to understand the power that the cycles of light manifestation have upon us.


Everything is pattern. Observing pattern is not simply observing things that are the same, but also observing the interaction between things that are somewhat dissimilar and yet hold a relationship between them. Synchronicity is a pattern whose cycle we haven’t understood yet, perhaps because we have not observed other occasions where two seemingly dissimilar things are in conjunction. In truth, the Law of Unity reminds us that everything is connected by the power of the divine.


Sacred calendar shows you your place in the cosmos. If you choose to accept it – and by that we mean work in accordance with it and not against it – your life becomes God-inspired and you reflect the divine spark. In accordance with the Law of Karma, we might say that difficult lives are about correcting the missed timing and actions that are out of rhythm from previous incarnations in a particular place and time. Now you can see that karma is also a cycle of time.


Karma keeps us in balance. Sacred calendar and karma are linked in terms of the Law of Balance. Karma in a psychological sense as well as an experience is equivalent to calendar rectification. If you are out of sequence with time in small ways you must gain or reduce atomic second, which is what NASA has done over the last decade. If you are out of balance in your life, it may require the addition of extra lifetimes (epigominal days) to restore the whole pattern. Balance in your life in large ways may be acquired through many lifetimes, which is the personal equivalent of the precession of the equinoxes.


Any time that you enter into the area of prediction, that is trying to ascertain where and when an event will occur, you are gazing into the time and space of a divine intelligence. The Law of Preponderance tells us that everything is a part of God consciousness. It all moves together like swarms of bees in a pattern that may appear random on the surface but the movement altogether has a kind of intelligence about it. The ancient alchemists who constructed orreries and planetariums in their laboratories understood that the movement of heavenly bodies was like watching the cogs in a wheel. One has only to glance at the Mayan calendar to see that they were making clocks well before the Swiss or Germans. Stellar bodies and planets have consciousness and operate on the Law of Vibration. Natural law is God or infinite intelligence. God is eternal – the past, present and future.

That said, you will find that learning sacred calendar will help you understand such things as astrology, numerology, and full moon meditations, as well as finding its usefulness in your work through the metaphysical journal, practical metaphysics, and ceremony practicum. It is the groundwork for all sacred ritual in every religion.
Posted by Normandi at 2:43 PM